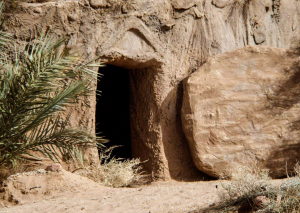 There are a number of facts that prove the resurrection but two key things are; firstly Jesus being present with the disciples and secondly that his body was absent from the tomb and it’s the second one we will be thinking about today. The tomb was empty and it still is!

From the other Gospels we find that Mary Magdalene was not alone on that Sunday morning, she was accompanied by the other women but she is certainly very prominent in the resurrection accounts. She is one of my heroes in the Bible, when so many are failing, she just seems to be concentrating on Jesus. She had watched as he was buried and sat there watching the tomb after the stone was placed there (Matthew 27:61). Very early in the morning, before the dawn she was heading back to the tomb. From Mark we get that she was bringing spices to anoint the body. Had she slept at all? How was she going to remove the heavy stone that she had watched rolled over the entrance to the tomb? There were also the issues of the guards and the Roman Seal on the entrance. I suppose she was not one of those people that needed to have everything planned out before she moved, she went in faith not knowing how the hurdles would be overcome. One thing is clear; she had unfinished business with Jesus.

For the disciples we have to wonder about their collective state of mind. It’s obvious they were not exactly excited and counting down the hours until the resurrection. Interestingly, the religious authorities did take note of Jesus’ words regarding the resurrection; they went to Pilate and petitioned to have a guard posted and the tomb sealed. Perhaps the disciples had given up but the Lord had not given up on them. It seems that the empty tomb was God’s means of preparing the disciples for a huge shock. Surely they must have thought; if he isn’t here, where is he?

The empty tomb is important information. There were people who hated Jesus so much they had lied and plotted to have him crucified. In a few weeks the disciples would be proclaiming the fact that Jesus was alive and his enemies must have been seething with anger. The obvious way to stop this movement of Jesus’ followers was to go to the tomb and produce the body, it would have stopped Christianity in its tracks and it would have ended up just another little known fact of history. But they couldn’t, there was no body, the tomb was empty because Christ has risen and that changes everything. Halellujah!

‘The ground began to shake,

The stone was rolled away,

His perfect love could not be overcome,

Now death where is your sting?

Our resurrected King has rendered you defeated.

Forever, He is glorified,

Forever, He is lifted high,

Forever, He is risen,